Grinding and Hustling on the Pro Tour

There’s a bit more to it than hitting tennis balls…

One of the biggest things I’ve learnt since being on the tour is that so much of it is not just about hitting tennis balls. There’s a huge amount of “behind the scenes” work that goes on before I even step onto the match court.  And I don’t mean practice sessions, time training in the gym and stretching.

When you turn on Sky Sports and tune into a Nadal-Djokovic war, the camera will occasionally zoom into the player’s box where you see their entourage- the coach, the physio, the physical trainer, the girlfriend, the manager, the nutritionist, the agent and maybe one or two others. It’s almost like these top guys have one person to take care of every need!

Djokovic’s Team Box at US Open. Even P Diddy made an appearance!

98% of players simply can’t afford to have a team of professionals with them (perhaps only the top 20/30) but there are quite a lot of players who can afford to travel with a coach. There are also many players who can’t afford either and have to scrap by week to week alone, figuring things out for themselves.* This is easily the toughest group to be apart of, you’re in the rat race with little help and have no one in your corner while you fight every week.  All you have is your will, your body and a dream.

A huge number of players who play Futures (lower tier of pro tennis and coincidentally the most costly) tend to fall into this bracket and the higher you move up in the rankings, the less likely you are to see players travel alone (fact).** I sometimes get questions off people who aren’t in the tennis bubble asking me if I am travelling with a squad to all these tournaments. Good question, but no, I’m a sole trader so to speak. I’m basically my own manager. I choose what tournaments I want to play, where and when I want to play them and who I want to travel with to them. I’ve played many tournaments for the last 4 years and have spent a huge amount of time alone- travelling alone, eating alone, competing alone etc. It is by far, without a doubt, the greatest challenge I’ve faced since turning pro. Sometimes you have to experience these things to really understand them but believe me, it’s not easy.

I’ve also had the good fortune of occasionally traveling with a coach to tournaments and the difference it makes is incredible. Someone that supports you during your match, someone to have meals with, someone to help with off court stuff, someone to travel with etc. It all adds up..

*(Sidenote:: interesting stat which I measured: Of all the tournaments I’ve played since turning pro, I have travelled alone to roughly 80% of them)

**there are always one or two exceptions

You are your own manager..

So what do I mean by ”behind the scenes” work? It means I have to manage anything and everything that needs to be taken care of on and off the court-tournament entries, flight bookings, other travel arrangements (which can take forever!), hotel bookings, finding roommates to cut costs, visas, tracking expenses,  finding practice partners on site, finding a doubles partner, booking practice courts, getting practice balls, getting rackets restrung and tonnes of other trivial tasks that absolutely need to be get done or else I can’t even play! Tournaments on the Futures calendar are frequently held in places that are hard to get to and can take a while to figure out how to get there.  For the Irish people reading this,  it would be the equivalent of having a Futures somewhere in Athlone. All this off court administrative work is done on pretty much a weekly basis and almost always in a country where english is not the native language.

Websites like skyscanner.com and booking.com have saved the day for me countless times when looking for cheap, fast, reliable hotel and flight information and I actually don’t know what I would do without them! I can’t image how players like me survived years ago without access to the internet! Ugh..

Aside from losing valuable time to do other (more important) things, it is also energy consuming and quite stressful.

And remember, all this off court stuff has to get done along with practicing for the tournament, physically training, remaining injury free and mentally preparing to play. After all, what’s the point in doing all of this if you’re not going to be ready to win?

As tennis players, we sometimes refer to these annoyingly difficult moments as “GRINDING”, you know, constantly dealing with everyday obstacles.  Some might call it “Hustling”.  It’s part of the job and I believe a lot of the guys who turn pro fall off pretty quickly by not being prepared for it. You are also away from home a lot and away from family and friends, this is magnified even more if you are from Ireland as we only have one international professional tournament per year. Compare this to Spanish/French/Italians and other nations that seem to have one almost every week! Players from those countries can stay within their own country and still play pro events every week, what a luxury! All this grinding is something you get used to but it is also something you don’t want to get too used to either.  The goal at the end of the day is to move on to bigger and better things and I certainly would like to move on to the main ATP Tour sooner rather than later. Competition is obviously tougher, but tour life is easier.

I often contemplate how highly ranked the top players (Federer, Nadal, Djokovic, Murray) would be if they had to do it all by themselves. They sure deserve everything they have right now and they have earned it, that’s for sure but I’d like to see an experiment where they had to travel alone without a coach/physio/girlfriend and had to take care of every off court arrangement. Would they still be top 5?

There’s light at the end of the tunnel.. 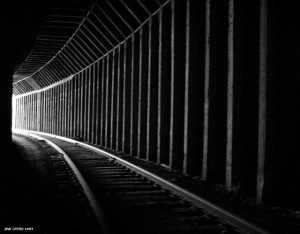 Now, obviously I’m showing you the less glamorous side of the tour and you may ask why on earth I would continue doing it even though it’s so tough. The reality is that I get to play a game I love, travel the world, meet new people weekly and have new experiences on a weekly basis. I get to compete and leave it all on the line in tournaments and there’s nothing better than that. I just wouldn’t be doing it if I didn’t enjoy it or feel it was valuable for me personally.

There’s also the incentive to make it onto the main ATP Tour. That’s what you see on T.V., that’s the big stage. You have it all there- big money, hot women, good crowds, exposure etc.

Once you make it onto the main tour, life without a doubt gets easier. I experienced this just the other month when I played Estoril ATP qualifications. Juan Martin Del Potro (world #9) was number 1 seed that week and I was attempting to qualify in to my first ATP event. (I lost second round qualies) Anyway, I had a free hotel for the week, free breakfast/lunch, free transport and the organisation was top class.  My only expenses were a flight over and my dinners every night. It was fun just being at the tournament and a world of difference compared to the grind of the Futures Tour.  All the small things added up really makes a big difference- free transport, free massages, having a comfortable players lounge, big crowds, having lines officials and ballboys etc. There was also a WTA women’s event at the same time so everyone was happy. Life is good at the top and I could get used to it very easily! You actually feel like a pro tennis player at these events which is not always the case at Futures!

Hope you enjoyed reading this and hope it gave you a better idea of what’s really involved.

*By the way, Is there anyone (or someone you know) out there willing to work for a cheap wage (hourly rate) to help with small tasks? No more than 2-3 hours per week. (flight/hotel bookings, making phone calls on my behalf etc.) Please email me with your experience and what you think is a reasonable rate. Email:  jamesmcgee01@gmail.com

My advice to Irish Juniors:

1. Find a very good coach who you believe in and actually can develop your game. If you are working hard and not progressing, change coach.

2. You need to love the game 110% if you want to go on the pro circuit, otherwise you will fade off very soon and might hate the game instead. (You will know if you love the game, your parents will not need to push you)

3. Get used to the term GRINDING!

4. Be prepared to sacrifice a lot if you really want to play this game professionally

5. Learn Spanish or French, these languages will take you far in the tennis world!

Last thing: Thanks for the interesting comments on previous posts. Interesting to hear your thoughts on Irish tennis. Keep ‘em coming.

7 Responses to Grinding and Hustling on the Pro Tour