The Idea Behind The Blog

The idea of creating a blog came to me when I first sat down with my good friend Barry King (former pro/ Davis Cup player-retired July ’11) a few months back when we were chatting about our lives, tennis, women, the future etc.

One thing that really struck us both was how little we knew about the pro tour before going on it. We just didn’t understand the whole thing! The system, the lifestyle, the travel, the day-to-day grind, dealing with injuries, the financial problems, the constant setbacks, the emotional highs and lows of the sport, the stress, the buzz…and that’s just the tip of the iceberg. 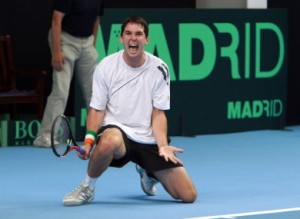 Neither of us had much guidance while we were growing up as to what life on the Futures/Challenger Tour would be like, I was hearing everything through people who hadn’t even played on the tour and who hadn’t been in the thick of it day in day out. All I saw on TV was Andre Agassi ripping forehands left, right and centre on Arthur Ashe Arena and Tim Henman  moving like a cat on the green grass at Wimbledon. I had big dreams and I just presumed growing up that if I worked hard enough,  I would make it there too. BIG Mistake. Hard work is absolutely key but there’s a lot more to it.

If we are to produce great tennis players in Ireland, I think it’s important for the younger generation of Irish tennis players to have someone with the experience to learn from.  Sharing my experiences on the tour may not improve these young athletes as players, but at least it gives them a better idea of the tour and what it’s like to be a professional tennis player.  I’m sure there are Irish junior players out there who love tennis and would love to be professional tennis players, but I’m not convinced they know how to get there. It is up to their coaches to help them, guide them and lead them forward.

We were very lucky to have someone like Conor Niland qualify into two Grand Slams in a row last year and show the Irish public that it is possible to make it to the top.  It was inspiring to watch him play in Wimbledon and go toe to toe with a top 50 player to only just miss out on a chance to play Roger Federer. I’m sure this has inspired a lot of kids around the country and has given them the belief that it can be done. That’s a huge step forward for Irish tennis as Belief itself is half the battle.

Here are some questions I have regarding Irish tennis. What do you think?

1. Is tennis being promoted well enough in Ireland to play the game?

2. Are there enough high level tennis coaches in Ireland?

3. Is there enough leadership in our tennis culture?

4.  Is there enough funding for our professional players?

5.  Does tennis get enough media exposure in Ireland?

6. Are we doing everything in our control to produce great tennis players?

7. Why haven’t we built indoor clay courts the way the French have?

15 Responses to The Idea Behind The Blog